Bosworth Music was founded in 1889 by Arthur Bosworth in Leipzig, Germany. Since 1948 the publishing house has been based in Cologne and was taken over by the Wise Music Group in 2001. In 2018, the Hal Leonard Group took over the print division of the Music Sales Group and thus also the renowned Bosworth Edition in Berlin.

As well as publishing older German choral titles, the Bosworth Chor Edition in Cologne has an assortment of wind music, big band, recorder, salon orchestra and amateur and school orchestras. From 2020, the Bosworth choir titles have been delivered exclusively by Hal Leonard Europe.

Additionally, the company has numerous film composers under contract, such as Ludovico Einaudi and Craig Armstrong. To explore the Bosworth catalogue, please visit: https://www.bosworth-print.de/.

Pianist and composer Ludovico Einaudi was born in Turin on November 23rd 1955.

In 1982 his talents won him a scholarship to the Tanglewood Music Festival, where he first came into contact with American minimalism. He spent the next several years composing for the ballet, the cinema and the theater, including “Sul filo d’Orfeo” (1984), “Time out” (1988), “The Wild Man” (1991), and “Salgari” (1995), as well as numerous pieces for orchestra and ensemble, which were performed at La Scala of Milan, the Paris Ircam and Lincoln Center, in New York. With the album “Stanze” (1992), a collection of sixteen compositions for harpist Cecilia Chailly, he set off on “a journey towards essentiality, trying to achieve the maximum expressive intensity using the minimum indispensable”. But it was with “Le Onde” [The Waves] (1996), his first solo album, inspired by Virginia Woolf’s novel, that he truly caught the piano world’s attention, and built on that with his next release, “Eden Roc” (1999), in which he played with a string quintet and duduk master Djavan Gasparyan, and “I giorni” (2001), a cycle of ballads for piano inspired by a trip to Mali. He returned to Africa two years later at the invitation of the Festival au Desert. A new album, “Diario Mali”, with kora master Ballaké Sissoko, blossomed from this experience.

The live concerts at La Scala of Milan, also recorded on disc, as well as the special concerts at the Hangar Bicocca and the Royal Albert Hall, marked the coronation of full artistic expression. In his next studio album, “Una mattina”, released in 2004, Einaudi’s music becomes more concentrated and introspective, while in the following “Divenire” it expands, driven by the sonorities of the Royal Liverpool Philharmonic Orchestra.

Both records, which were already topping the classical charts, also crossed over into the pop charts, a first. He was the only classical musician to play at the first iTunes festival. During the extended world tour that followed, he never stopped writing new music.

In 2009 he released “Cloudland”, with Robert and Ronald Lippok, and “Nightbook”, a nocturnal, introspective work that “projects the piano in every direction, like a shadow”. The peak performance of his European and American tour was once again at the Royal Albert Hall, recorded live and released as a double CD and DVD.

For two consecutive summers he conducted the Orchestra della Notte della Taranta, exercising a visionary musical direction that left a mark in the traditional music of the “black land of the tarantola”.

In 2013 he released “In a time lapse”, a reflection on time, recorded in a monastery and “conceived as a suite or as the chapters of a single novel”, in which his piano was accompanied by strings, percussion and electronic tracks. The world tour that followed featured many remarkable performances, such as the concerts at the Sidney Opera House and at the Arena of Verona in particular, but also the acclaimed “Piano Africain” performance, for six pianos and six balafons and marimbas, which opened the Piano City Milano festival in 2014.

The album “Elements”, released in 2015, sprang “from the desire to start anew, following different paths”. Recorded over a span of three months in his home studio in the Langhe countryside, “while spring was exploding”, the album became “a map of thoughts and feelings, points, lines, shapes and fragments of an ongoing interior flow through myth, Euclid, the periodic table and Kandinsky’s writings.” During the next three years, the “Elements” tour sold out both the world’s premier pop arenas and the most renowned classical concert halls.

In 2016 he performed his “Elegy for the Arctic”, commissioned by Greenpeace, on a floating platform amidst the ice in the Arctic Ocean.

The same year marked the debut of “Dieci Notti” at Teatro Dal Verme, in Milan, which would become an annual concert series with special events, “to give back something to a city that has given me so much”.

Emerging from long winter walks in the mountains, “Seven Days Walking” is an ambitious and visionary project of seven records, released monthly from March to October 2019, representing as many variations around the same imaginary route, “following the meandering creative process as in a labyrinth, among the forms denuded by the cold, in a kind of extreme essentiality”. At the same time as the cadenced album releases, he resumed touring major American and European venues, including seven consecutive sold-out shows at London’s Barbican.

Also in 2019, he wrote the original music for “Mary said what she said” about the life and torments of Mary Stuart, directed by Bob Wilson, starring Isabelle Huppert and produced by the Théâtre de la Ville de Paris. He was also commissioned by the Teatro Massimo in Palermo to compose the opera “Winter Journey”, with the original libretto by Colm Tóibin and direction by Roberto Andò: a journey through the desolate winter of today’s Europe. Both works confirmed the composer’s maturity and depth in musical theatre.

Performances and world tours were interrupted by the pandemic, but some of his music from “Seven Days Walking” and “Elements” continued to walk on its own, in the two most awarded films of the season: “Nomadland” by Chloé Zhao, (six Oscars, two Golden Globes and the Golden Lion in Venice) and “The Father”, by Florian Zeller. Much of his musical production for the big and small screen is collected in a double album with the title “Cinema” which was released in June 2021, preceded by two collections recorded during the lockdown and released in 2020: “12 songs from home”, played on the piano at home, and “Einaudi Undiscovered”, a series of lesser-known songs, memories, surprises and rediscoveries selected by the composer.

In the summer of 2021, Einaudi took his music back to nature, in a series of eleven concerts immersed in the breathtaking scenery of national parks, nature reserves, creeks, valleys, lakes and pristine mountain meadows, reachable only on foot, at dawn, at dusk and under starry skies. An invitation to merge the musical experience with the natural landscape.

But it was the experience of suspended time during the lockdown, “with the world outside quiet and silent”, that led to the new solo piano album, released in 2022 and entitled “Underwater”, “a metaphor for fluidity without external interference”. A fresher and more immediate approach to music, in the flow of emotions, in an intimate conversation, face to face, with the piano”. 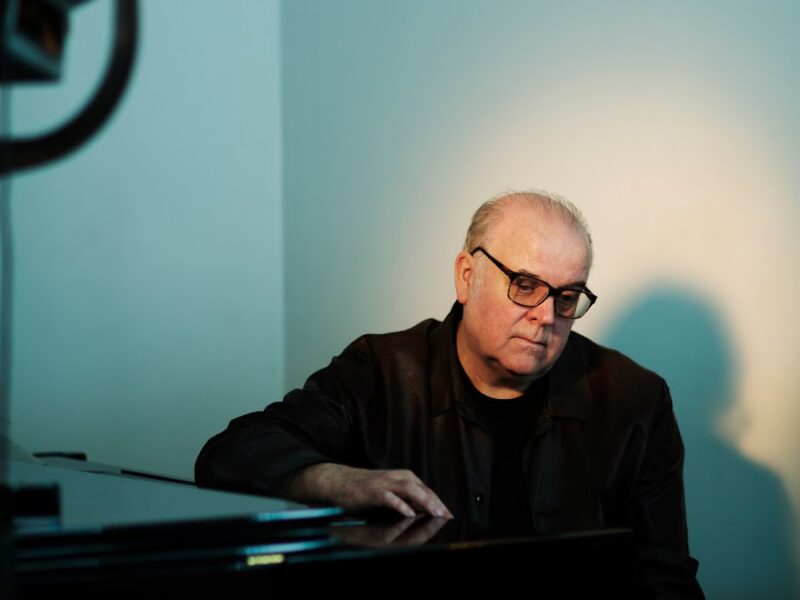 Craig Armstrong is a Scottish born composer. Through his orchestral writing, electronic music and wide ranging artistic collaborations in classical and film music, Craig Armstrong’s distinct compositional voice has received world wide acclaim. The composer studied at the Royal Academy Of Music under such greats as Corenlius Cardew, Paul Patterson and Malcolm MacDonald. Developing an approach that evokes the most delicate shifts in atmosphere and emotion.

Armstrong has built an impressive repertoire of both classical and popular music. Citing influences from classical, jazz, pop and experimental music. Armstrong has a world-renowned reputation for composing award winning film music. Having composed scores for both Hollywood and independent films from Peter Mullan’s directorial debut The Close Trilogy to the BAFTA, Ivor Novello and Golden Globe winning award scores for Baz Lurhmann’s Romeo and Juliet, Moulin Rouge!. Many more films have benefited from Armstrong’s music including The Quiet American, Orphans, Love Actually, World Trade Centre, Elizabeth:The Golden Age and Far From The Madding Crowd. Armstrong’s film score for Ray! directed by Taylor Hackford was awarded a Grammy for original score. The long standing artistic relationship Armstrong has with both Mullan and Lurhmann has continued to present day with work for Peter Mullan on his award winning film Neds and the Grammy score nominated The Great Gatsby for Baz Lurhmann.
Oliver Stone is another long term collaborator for Armstrong from the aforementioned World Trade Centre to most recently working on Stone’s bio-pic, Snowden.

In 2018 he completed work on the critically acclaimed Mrs Lowry and Son, directed by Adrian Noble. Armstrong has worked with the director Giuseppe Capotondi for The Burnt Orange Heresy, which was released in 2020 and in 2019 Armstrong was reunited in collaboration with director Thea Sharrock (dir. Me Before You) for her new feature for Disney, The One And Only Ivan which will be released in Autumn 2020.

Working primarily from his studio in Glasgow, Armstrong continues to work internationally in composition. In 2010 he accepted an OBE at the Palace of Holyroodhouse for his contribution to music and in 2016. He received the Henry Mancini Award from the American Society of Composers Authors and Publishers (ASCAP).

More details on over 130 years of Bosworth history can be found here.